“The clearest way into the Universe is through a forest wilderness.” John Muir

In the days leading up to our departure, Ian and I began watching Ken Burns’ The National Parks: America’s Best Idea.  The words of John Muir have been resonating with us since our departure, and for the past two days we have been able to experience a small portion of the park which he loved so dearly.  To say Yosemite is grand is a vast understatement… Words cannot express and pictures cannot do justice.  Most of us have seen the pictures- Half Dome, El Capitan, the Yosemite Valley- yet my jaw dropped as we exited the nearly mile-long Wawoma Tunnel upon Tunnel View.  Millions of years of Mother Nature’s handiwork lay before us, and I felt smaller than I have ever before.   Not for a single moment in our time inside the park did my awe of the surrounding natural beauty cease.

Despite the astounding beauty, Ian and I were both left disappointed in the caretakers who have allowed such a level of development and comfort within the park.  A lodge, a hotel, a restaurant and a bistro, an art gallery full of pictures of the grandeur that was right outside the doors.  After learning of Yosemite’s history, of John Muir’s devotion to the land and the effort he put into preserving it as a wild place, all of the “un-wild” around us just felt wrong.  Due to our timing, we were obligated to drive into the village and witness this cruel infliction upon nature both days we visited the park.  Other times of the year, it is possible to avoid the village, and we both could only hope that those closed sections of the park were left to the wild.

We had intentions of hiking during our time in Yosemite, and since Brewer is not able to join us on the majority of trails, we chose to take him into the park our first day, so that he would be plenty worn out the following day. 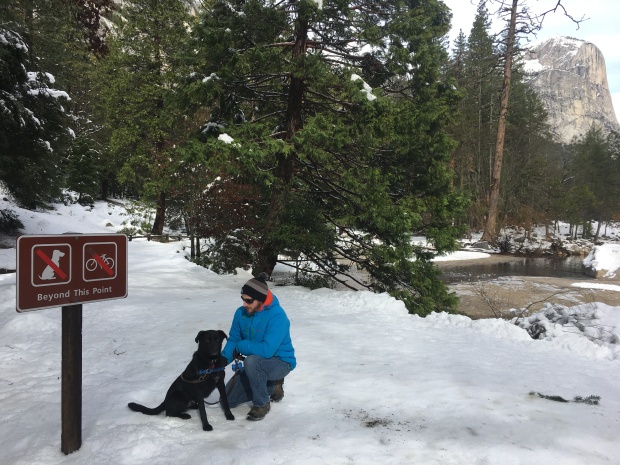 We were able to comfortably leave him in the RV for several hours while we went into the park for a hike.  Many trails are closed this time of year, so we did not have a lot of options, but once I learned there were falls accessible by a 3.5 mile trail, my mind was set on going there.  I’ve dreamed of walking along a wilderness trail, spray from a waterfall hitting my face and cooling me, rainbows visible in the mist.  This is not quite the experience you get in January.

Lately, I have been having some trouble sleeping through the night.  I have strange dreams, my mind is racing, or I am restless in general.  This was the case again, the evening before our hike.  I was out of bed the moment my alarm went off, having been trying to fall asleep for the 45 minutes prior.  I was eager to make coffee and breakfast, finishing packing for the hike, and hit the road to the park.  I was also tired and a bit grumpy; Ian, whose understanding of my moods I continue to be astounded by, handed me his phone and said “I’m going to walk the dog, get some Headspace, it’s only ten minutes.”

Ten minutes later I had done some light meditation and my head was in a better place, ready to be off to the park.  An hour later my breath was again taken away at Tunnel View, and I barely caught it again in the following hours. The day prior had been sunny and clear, now it was overcast and it was evident the storm that had been forecast was coming, and soon.  We set off on John Muir Trail, with Nevada & Vernal Falls viewpoints our destination.  Ice still covered portions of the trail, which gains nearly 1800 feet in elevation in the 3.5 miles to the falls, so we took care to ensure stable footing on the way.  It was difficult to not stop every minute to take in the sights around us, but we had to keep moving.

About 2 miles into our hike it became obvious we would not be making it to the falls.  The thunderous sound of ice sheets cracking and falling down the nearby rock face and the knowledge of a coming storm were enough to turn us around.  We found some dry rocks of granite to sit on and eat our lunch of sandwiches and an apple, then headed back down the trail. The trip down seemed much quicker, and by the time we reached paved trail again I was glad we made the decision to turn around when we did; the rain was coming down harder every minute, and the sounds of ice cracking grew more fierce.  At 6am if you had told me we would not make it to the falls my mood would have turned darker than the clouds that now hung over the valley; instead, I felt overwhelmed with beauty and gratefulness for my ability to hike any portion of Yosemite

As we drove out of Yosemite, I thought back to the day prior, when I had filled our water bottle from the near-freezing Merced River.  My mind wondered how far that water that had flowed past and chilled my fingers had travelled in the 24 hours since I had come in contact with it.  Taking in those sheer rock faces, seemingly smooth from a distance, I marveled at nature’s handiwork, the relentless forces of water creating such beauty.  I wondered what John Muir would say if he saw today’s Yosemite. We could only leave the park hoping that we are not the only ones who desire to see Yosemite returned to the wild.

Thousands of tired, nerve-shaken, over-civilized people are beginning to find out that going to the mountains is going home; that wildness is a necessity.
I am losing precious days. I am degenerating into a machine for making money. I am learning nothing in this trivial world of men. I must break away and get out into the mountains to learn the news.
John Muir 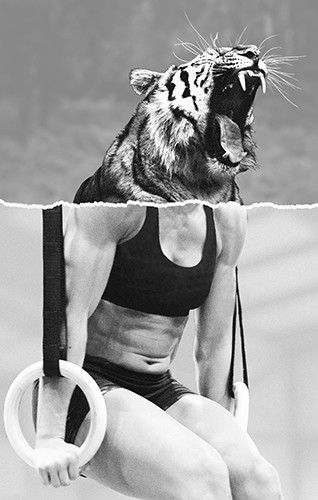 I will be tracking how I keep up my fitness while on the road. Check out some interesting ways I stay in shape while living in under 250 sqft. on wheels!

Where are We Now?